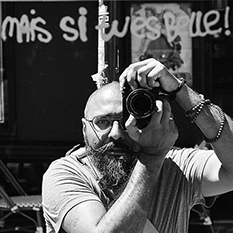 My name is Hash Varsani, and I'm a professional photographer. An X-Pro Photographer who sold all his Nikon and Linhof gear.

Found my zen in image making and refined my visual awareness in the Fuji X-Pro system.

Eliel Saarinen was a craftsman and revered architect woven into the fabric of Finnish design history. Finnish National Romanticism was vibrant, inspirational, and the root of Saarinen’s heritage. His home, Hvitträsk is located just outside of Helsinki. I paid a visit with friends, to pay a little homage before heading out to another Finnish cultural tradition, the sauna.

Hvitträsk grew on me and my respect for him as a designer, architect and practitioner of workmanship grew too. Everything was customised for his living pleasure. Chairs, rugs, wall coverings, doorways for his width and height, even his bed was shorter than most. Perfection was everywhere for him it seems.

The house was home to family, friends and work. His studio was where I gravitated to most. The feeling of knowing that work was being done to plan cities, buildings, drawers full of A1 plans and sheets of drawings was pretty inspiring. A remarkable little annex attached to a home that was never too far away. The perfect work from home environment.

Prolific in his career as an influencer, he was the architect for many important cultural landmarks in Finland and across the pond. The Central Railway Station in Helsinki, The Finnish National Museum, Cranbrook Academy of Art, were all part of his expansive and significant folio.

Saarinen later became president of Cranbrook, considered to be, or at least tried to be, America’s version of the Bauhaus. Charles and Ray Eames who were fellow students of Saarinen, were influenced by his furniture in their later works. Additionally, his son Eero, who would be playing under the desks in his studio as a child, became one of the most important American architects of the 20th Century.

Walking around with my Fuji X-Pro 2, capturing little details of his work, immersed me again into the design history I once studied. I’m sure I’ll keep finding more nuggets like this on my travels through Finnish design, rich with intense heritage, influence and culture.

Go to the gallery for more images.